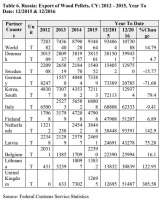 
The Russian Federation recently filed its annual biofuels report with the USDA Foreign Agricultural Service's Global Agricultural Information Network, reporting wood pellet production and exports are expected to increase by 10 percent this year, reaching 1.45 million metric tons. The increase is expected to be driven primarily by strong demand from Europe and more interest from Asian markets, along with a soft ruble and increasing local consumption.

While Russian pellet production is expected to increase this year, the report indicates a lack of domestic pellet standard, poor transportation infrastructure, a lack of warehouses and the product's seasonality will work to negatively impact development of the sector.

According to the report, Russia is currently the third largest exporter of wood pellets to the EU, following the U.S. and Canada. The country accounts for approximately 6 percent of the world's pellet exports, 3 percent of global production, and ranks eighth globally for total wood pellet production.

The full report can be downloaded from the USDA FAS GAIN website.

"ProteinTek" Forum & Expo is dedicated to the development trends and technologies in the production and use of plant's & microbial proteins for human consumption and animal feed.